The high resolution, quadrupole-time-of-flight tandem mass spectrometer is installed at the Research Center of Natural Sciences, Hungarian Academy of Sciences. The instrument is equipped with MALDI, ESI and nanospray ion sources, as well as an UHPLC nanochromatographic system. These are ideal for proteomic studies, needed high sensitivity and high mass resolution. The sensitivity of the mass spectrometer is in the low fmol range using on-line nanoHPLC coupling.

The aim of the study is the analysis of posttranslational modifications of proteins, which are involved in Rheumatoid arthritis. These proteins are major plasma proteins with diagnostic significance, such as fibrin(ogen), vimentin and filaggrin proteins, immunoglobulins, as well as peptides derived from these proteins. Our aim is the detailed study of protein citrullination and glycosylation, partly in focus on the change of IgG glycosylation patterns during inflammation, to explore the connection of changes in protein structures and Rheumatoid arthritis. We plan the analysis of synthetic peptides for method development, as well as proteins/immunoglobulins isolated from blood plasma, included peptides generated from these proteins. 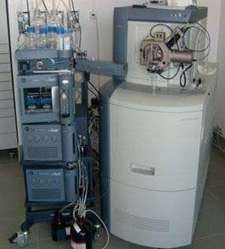