Role of regulatory proteins in the aging process

Despite its medical, social and economic significance, the biological basis (mechanism and regulation) of the aging process has remained largely unknown. One of the most striking common features of all aging cells is the intracellular accumulation of cellular damages (e.g., oxidized, aggregated or unfolded proteins), which act as cellular toxins (as they interfere with cellular function) and can potently induce cell death. Their life-long, progressive accumulation is mainly caused by age-related decline in the capacity of cellular repair processes, such as autophagy, the proteasome-ubiquitin system and the heat shock protein (molecular chaperon) system. Interestingly, the capacity of these cellular repair processes shows no age-related decline in immortal biological systems (e.g., germline, tumorous cell lines, and certain cnidaria such as medusa and hydra). The common feature of these immortal systems is the activity of the piRNA-Piwi pathway whose main biological role is to inhibit the transposition of mobile genetic elements also called „jumping genes”. According to our hypothesis, the progressively increasing activity of mobile genetic elements (note that nearly half of the human genome consists of such mobile genetic elements) in the somatic genome causes the aging process to occur (via transposon mutagenesis). In the frame of the current project, we intend to discover the functional relationship among proteins that regulate the activity of mobile genetic elements (Vellai group), autophagy and endoplasmic stress-response (Bánhegyi group), as well as the heat shock protein system (Sőti group). In the soma of genetic model systems, we wish to inactivate mobile genetic elements, and test the effect of this intervention on lifespan. We will also monitor the age-dependent activity of certain components of autophagy, endoplasmic reticulum ad heat shock protein systems; a natural, age-related decline in their activity will be demonstrated. In older animals, we search for transposon insertions (mutations) in genes encoding components of autophagy and heat shock proteins. By determining protein structure, as well as performing molecule design and molecular biology methods, we intend to determine drug candidates inhibiting mobile genetic elements, with anti-aging and neuroprotective effects. Finally, novel factors blocking the piRNA-Piwi system will be determined in order to inhibit proliferative ability in tumorous cell lines. 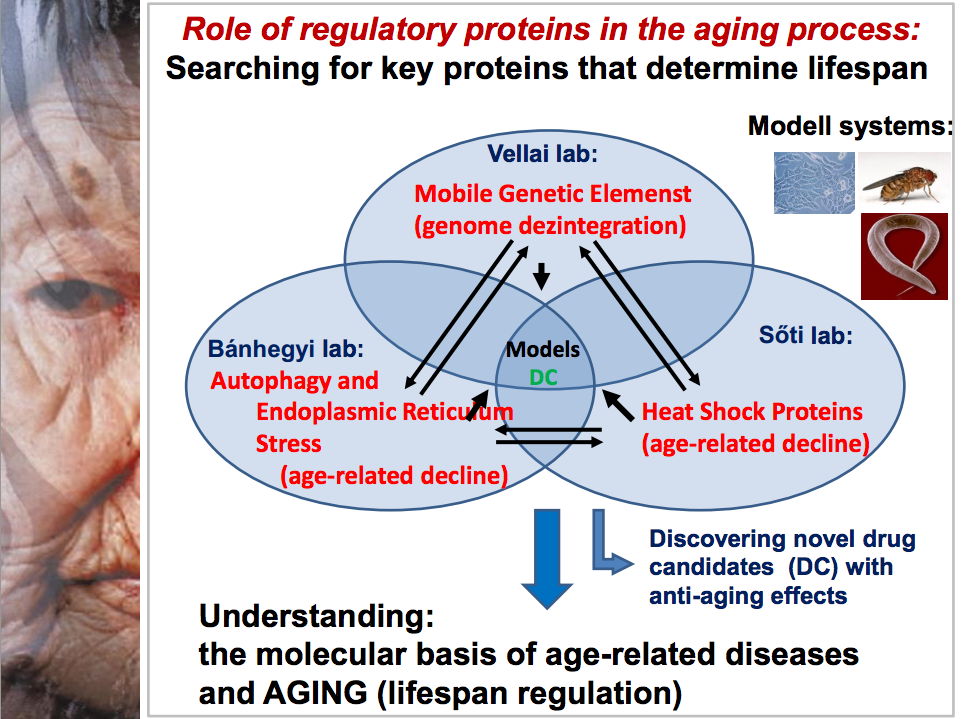