A novel pathomechanism for initiation inflammation

Inflammatory disorders are severe disease conditions and in most cases there is no adequate and specific treatment available. It is, because in most cases the exact pathomechanisms of the inflammatory reactions and the related potential drug targets are unknown. Recently, a novel, potentially significant mechanism for inflammation initiation has been discovered at the Research Centre for Natural Sciences (RCNS), Hungarian Academy of Sciences in collaboration with the 3rd Department of Internal Medicine, Semmelweis University. The researchers demonstrated that MASP-1, the initiator enzyme of the lectin pathway of the complement system can directly activate endothelial cells. MASP-1, similarly to thrombin, cleaves protease-activated receptors (PARs) on the surface of the cells. By doing so, the protease acts like a hormone; by cleaving PARs, an extracellular event (trauma, infection) is converted into a transmembrane signal triggering a cell response. In a parallel study novel selective inhibitors have been developed against the lectin pathway proteases at the Department of Biochemistry, Eötvös University. Such inhibitors apparently do not exist in nature. In the frame of the “Synergy Program” the three research groups join their forces to reveal the details of the novel inflammatory mechanism. The knowledge and expertise of each research group is indispensable for the success of the research.

A major question is whether the above mentioned signal transduction process alters the pattern of the adhesion molecules on the endothelial cells. It is of central importance because it is a prerequisite for the leukocytes to transmigrate through the endothelium. Another study will test whether appropriate, extravasation-enabling adhesional interaction develops between the MASP-1-triggered endothelial cells and neutrophil granulocytes.

In the frame of the joint project the research group of the RCNS produces the recombinant MASP-1 proteins (wild type and mutant), while the laboratory of the Eötvös University provides the in vitro evolved inhibitors. The studies concerning the pro-inflammatory action of MASP-1 and the anti-inflammatory action of the inhibitors on the endothelial cells will be performed at the laboratory of the Semmelweis University. 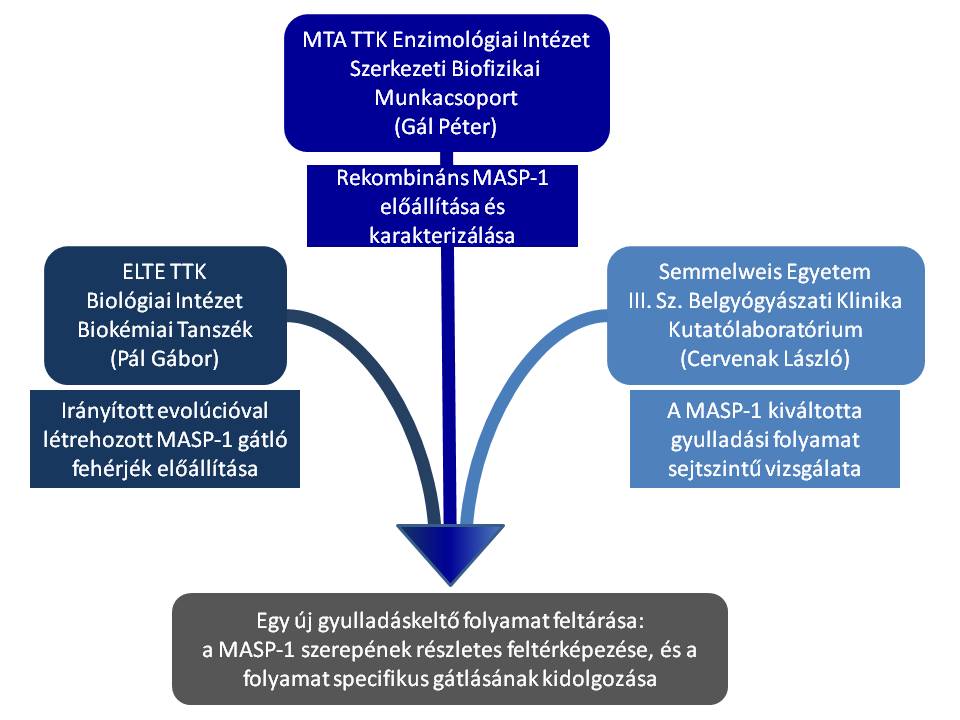