We applied for MEDINPROT Instrument time for measurements to be performed on the Bruker 700 MHz NMR spectrometer at Eötvös University.

Our goals are twofold:

a) Introduction and broad application of novel NMR spectroscopic techniques. Good quality multidimensional measurements can necessitate day-long acquisition, time during which samples can decompose. The latest hardware improvements make possible the reduction of measurement time for the multidimensional experiments. In order to speed up data acquisition we intend to reduce the duration of each repetition of the experiment using rapid pulsing techniques. Among these are the 2D SOFAST (Band-Selective Optimized-Flip-Angle Short-Transient) HMQC and 3D BEST (Band-Selective Short Transient) type triple resonance measurements.

b) In the focus of our attention is the S100A4 protein that gained increasing attention over the last decade because of its metastasis promoting properties and also due to its important role in the pathogenesis of rheumatoid arthritis and fibrotic diseases. We study the interaction with the TAD domain of the p53 protein. The atomic level characterization of this complex can reveal new insights in the function of the p53 system. The other interaction partner is the tail region of non-muscle myosin 2a, which has a partly disordered, partly coiled-coil structure. We intend to give reasonable explanation why the selective phosphorylation occurring at the disordered part hinders the formation of a complex with S100A4, altering in this way the S100A4 function and metastasis. Folding and interaction of both the apo- and Ca2+ bound S100A4 is planned to be described under in-cell conditions as well. 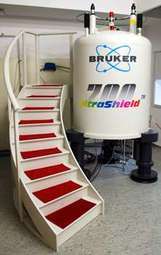