Fitness landscapes, depictions of how genotypes manifest at the
phenotypic level, form the basis for our understanding of many areas of
biology, including quantitative genetics, systems and evolutionary
biology. We assayed the native function, fluorescence, of tens of
thousands of mutants of the green fluorescent protein (avGFP). We found
that fluorescence rapidly decreases with accumulating mutations, with
about 75% of single mutations leading to a decrease of fluorescence and
beneficial mutations being very rare.

The decline of fluorescence with the number of mutations was enhanced by
epistasis, such that the joint contribution of mutations led to stronger
effect on fluorescence than the sum of their individual contributions.
We detected epistasis in up to 30% of assayed genotypes with multiple
mutations and found that it arises mostly through the accumulation of
slightly deleterious mutations that cause a threshold-like decrease of
protein stability and concomitant loss of fluorescence.

Approach that we developed to understand the genotype to phenotype
connection in avGFP has immediate applications in protein design. Our
pipeline allows to obtain functional information about thousands of
mutants simultaneously and can be used for design and improvement of
molecular tools, in particular, fluorescent protein-based indicators.
Moreover, fluorescence of a genotype can be predicted with high accuracy
by a simple two-layer neural network suggesting that it might be
possible to design distant homologous proteins with the same function.

The fourth Conference of the MedInProt Protein Science Research Synergy Program was held on April 9. 2016, at Eötvös Loránd University. 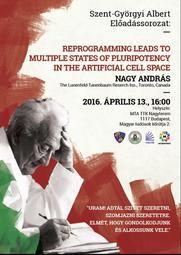