Afterlife of the MedInProt Conference: echo of István Katona’s lecture 2016-05-25

Many candidates form the audience wished to try the STORM-super resolution microscopy system introduced by István Katona, invited speaker of the latest MedInProt Conference. In addition, a new and promising collaboration started, studying the endocannabinoid system’s involvement in the biology of tumours. The fast result is gratifying; we wish colleagues working in other interdisciplinary fields would succeed in finding each other.

We wish them a successful collaboration! 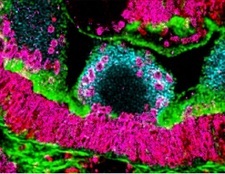 The next speaker of the Albert Szent-Györgyi Lecture Series will be Professor Bela Novak, of the Department of Biochemistry, Oxford University, on May 11th, 2016, 4 pm, at the Research Centre for Natural Sciences of the Hungarian Academy of Science. The title of his talk: Cell Cycle Switces.
Bela Novak graduated as a bio-engineer at the joint program of Eötvös Loránd University and Budapest University of Technology and Economics in 1980. After habilitation at BUTE in 1995 he become a full professor there at the Department of Agricultural Chemical Technology in 1996. In 2006 he was selected as the first professor of the newly established Integrated System Biology Center at Oxford University. Since then he is a full professor at Oxford University the largest and one of the most prestigious Biochemistry department of Europe, and has an internationally highly acclaimed system biology research group. His research interest is biological processes and studies and cell proliferation by using chemical kinetics and mathematical modeling. In his talk he will discuss the role of the so-called switch proteins precisely regulating cell growth and division, the cell cycle. 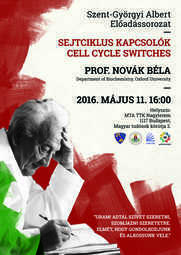